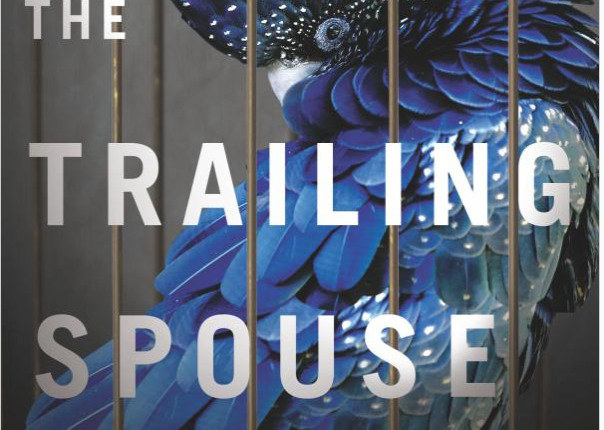 I am so happy to share this review and interview with Jo Furniss! Jo is a member of our Expat Book Club and author of the Amazon charts bestseller ‘All the Little Children’. Here she talks to us about her life as an expat and the inspiration behind her second novel, ‘The Trailing Spouse.’

But first, here’s my review of the book…the title of which I am sure has raised the eyebrow of anyone who has been an ‘expat wife’.

This novel exposes the dark side of expat life in Singapore and its clever plot lines will keep you guessing right to the end.

Amanda Bonham seems to have it all. But when she finds her maid dead in an apparent suicide, the cracks in her perfect life starts to appear. She discovers that her maid was pregnant and also hiding a stash of drugs in her room prescribed to a Amanda’s husband. Amanda questions everything – who is her husband really? And what is he getting up to when he is travelling?

Across Singapore, Camille Kemble is on a quest to find her missing parents, and she believes Amanda’s husband has the answers she needs.

Both women become obsessed with finding the truth, whatever the consequence.

This is an accomplished domestic thriller, and Furniss’s evocative use of language makes the reader feel the tropical heat of Singapore closing in. The trailing spouse – or accompanying wife – in Singapore really is completely reliant on her partner. She has no right to a bank account in her name and little ability to work independently. The privileges of expat life are juxtaposed with the threat of it being so easily taken away. I was surprised to read that maids are not allowed to get pregnant in Singapore – and if they do, their right to work is revoked. Honestly, that was one of the things that chilled me most in the whole book. Furniss skilfully exposes the plight of domestic workers in Singapore and weaves it into the plot.

The novel successfully shows how an ostensibly perfect life can be very flawed, and that the surface never fully reflects what is going on within. Furniss’s characters are very real and I felt a lot of sympathy for Amanda as the novel progressed. There are lots of interesting themes here – what it means to be a mother; what it takes to make a marriage work; the impact parents’ choices have on their children – which makes this much more than just a page turner.

I’m sure anyone who has spent time in Singapore, or the Far East, would enjoy all the cultural references – and probably feel like they have met some of the characters. If you have spent any time as a ‘expat wife’ this book is definitely worth a read. And – minor point – the cover is beautiful! You’re an expat and an author – which came first? Being an expat or an author?

I’ve been an expat since 2002 and didn’t start seriously writing fiction until 2012, so I think the life experience earned by travelling gave me plenty of material! I’d always wanted to be an author and when I found myself living in a tiny Swiss village with two babies and little chance of getting back to work, I decided to take an online course in Creative Writing. So the two were inextricably linked.

Tell us a little about your expat journey

When I met my future husband in 1999 – days before the new millennium – he told me romantic stories about his time as a coffee buyer and bush pilot in East Africa. Safaris. Zanzibar. G&T. At the time, I was a BBC journalist in Birmingham. I love Birmingham, but even most Brummies would say it’s a no-brainer! We set off to Africa, although his new job took us to Cameroon on the other side of the continent. I worked as a freelance journalist and the job opened doors into the local culture making it a memorable time.

After two years, we were sent to Singapore and had barely settled in before his job moved to Switzerland. I thought it would be easy to come back to Europe, but that was a tricky posting. It was also hectic, as I had two children there and started writing a novel.

But after seven years, we were offered a second posting to Singapore. I’d always had a feeling of unfinished business, so I was keen to go back. Plus, I knew it would be a brilliant place to raise kids. After five fab years, we came back to the UK. In many ways, it’s the hardest move I’ve ever made and I’m not sure that I’m finished with the Big Expat Adventure.

The Expat Book Club is all about connecting women living overseas through a love of reading. Have you been a member of a book club during your time living away from home?

During my first posting to Singapore, I joined a book club that produced a couple of important friendships. By the second posting, I had moved on to writing and I don’t think that makes me a good book clubber. I get too intense. I’m a little scary, I suspect!

What inspired you to write your novel?

For my first novel, ALL THE LITTLE CHILDREN, I was inspired by two things: motherhood and Switzerland. When I first became a mother, I was shocked by the critical discussion of mothering in the media and between women. It felt painfully judgmental. At the same time, because I lived in a remote village, I spent a lot of time walking in the forest. The isolation and the concept of coming-of-age as a mum fused into a survival thriller. It’s set in Shropshire, England, but the sensibility came from Switzerland.

For the second, THE TRAILING SPOUSE, I was grabbed by the idea that it would be easy for a business traveller to get away with murder. Too easy. What if an expat wife, like myself, found out that her perfect husband was doing more than business while on his travels?

Did you write the novel while living in one country or did you move?

The first novel was written between Switzerland and Singapore, with a big hiatus when we relocated. But when we moved from Singapore to the UK earlier this year, I was writing to deadline so had to complete the edits to THE TRAILING SPOUSE while packing. Literally, I edited on my last day in Singapore, edited on the plane, edited on my first day in England in between shopping for warm duvets and stockpiling the kitchen cupboards!

How did the experience of writing differ to the work you did in your career previously?

I was a journalist, so writing and deadlines are quite normal for me. What is different is the isolation. Writers can spend many hours on their own, mixing only with fictional people. Clearly, this is not healthy. I’ve always found it vital to maintain a community of writer friends who recognise the signs and drag you out for a coffee when you start to talk back to the voices in your head.

How did you research your novel?

My books are contemporary, so I’ve never done much hard research. For THE TRAILING SPOUSE, I kept a notebook on me as I went about my daily life and would scribble down little observations on Singaporean expat life, everything from snippets of conversation and cool locations to observations of the light at different times of day.

And tell us a little about you as a reader – what genres do you enjoy? Do you have a favourite book or author?

I’m an eclectic reader, but in recent years I’ve come to focus more on thrillers. I like page-turning novels with high-quality writing, so current favourites are Tana French and Belinda Bauer.

Is the book based on your own experiences?

Both my books are inspired by my experiences and my emotions, even fleeting ones. I like to take a circumstance from my life and ask ‘what if’… one if someone moved to another country to be with a man she loved and then found out he wasn’t what he seemed? What if being dependant on a man eroded your confidence until you started to unravel? I like to turn my experiences on their head.

How did you find the writing process? And how long did it take you to write the book?

My first novel took several years – I started writing in 2013 and it was published in 2017. But the clock is speeding up now as I’m under contract! My third novel will need to be sent to the publisher within a year.

What does a normal workday look like for you?

At the moment, during the summer holidays, I’m grateful for slivers of time. It’s now 10pm on a Sunday night, but it’s the first chance I’ve had all day to work. Once term starts, I’m pretty disciplined and use school hours for writing.

Did you experience any creative slumps? How did you get yourself out of them?

I’ve noticed a pattern in my writing; I start a book with huge enthusiasm, about halfway through I think it’s utter poop, and then I get a surge of energy towards the end. It’s good to know your process!

Many of us expat women find ourselves moving from full time work to no work…would you encourage others to write?

There’s a great community amongst writers, which is attractive to expats, and I’ve met many men and women over the years who’ve taken up writing for a variety of motivation, some are dead set on publishing and some see it rather like volunteer work: an enormously rewarding challenge.

What’s next for you and your writing?

I’m working on my third novel. It’s a domestic thriller about an American journalist, Rose Kynaston, who moves to the UK to live in her British husband’s home town. But whereas I got a warm welcome when I came home, Rose discovers that her in-laws are hated by the local community, and when a body is discovered on the family property, she wonders if the vitriolic rumours about her husband and his family might be true… After spending a decade as a broadcast journalist for the BBC, Jo Furniss gave up the glamour of night shifts to become a freelance writer and serial expatriate. Originally from the United Kingdom, she spent seven years in Singapore and also lived in Switzerland and Cameroon.

As a journalist, Jo worked for numerous online outlets and magazines, including Monocle and the Economist. She has edited books for a Nobel laureate and the palace of the Sultan of Brunei. She has a Distinction in MA Professional Writing from Falmouth University.

Jo’s debut novel, All the Little Children, was an Amazon Charts bestseller. One Reply to “Expat Author and Book Review: Jo Furniss, author of ‘The Trailing Spouse’”