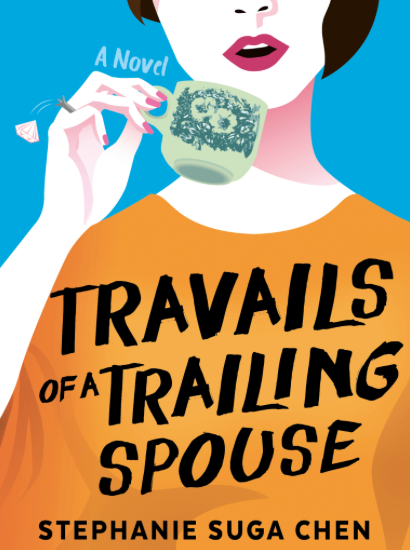 One of the lovely and unexpected things that has happened since I set up The Expat Book Club is that I have made connections with lots of other expat women – all of them are readers, but some of them are authors too.

Our first ‘Expat Author’ is Stephanie Suga Chen. Stephanie is Tawainese-American and her first novel, ‘Travails of a Trailing Spouse‘, is based on her experiences of expat life in Singapore – and there are lots of details that will chime with anyone who has done an expat stint in Singapore. We follow the main character, Sarah, as she transitions from corporate life to expat life and, as is clear from the title (which I’m sure is rather tongue in cheek), this is not a change that she finds easy. Sarah’s ups and downs are portrayed  honestly – she is, frankly, not always a likeable character. The part of the book that rang truest for me was the strength of the female friendships borne out of expat life.

Stephanie, you’re an expat and an author – which came first? Being an expat or an author?

An expat first! I moved to Singapore with my husband and two young children five years ago. Then it took me over four years to discover that I was a writer, too!

Tell us a little about your expat journey

Like many “trailing spouses,” we moved due to my husband getting a great job offer. But I was ready for an adventure as well – our kids were young (1 and 4 at the time), and it seemed the ideal time to go away for a few years! But upon arrival, after the initial period of settling in, I admit that I floundered, for quite some time, actually. I worked out, I studied Chinese, I went out for lunch…a lot. But I felt lost, and at times, disenchanted. When I started writing, it was as if my world became clear again. Now that the book is out and people have begun to read it, I’ve gotten an outpouring of trailing spouses saying “Yes! That’s how I feel, too!”

The Expat Book Club is all about connecting women living overseas through a love of reading.

Have you been a member of a book club during your time living away from home?

Yes! I recently joined a wonderful book group through one of the expat organizations and wish I had done it sooner. It’s a great way to meet people and form relationships over a common interest, as opposed to the usual “Where are you from?”, “What brought you here?” etc.

Did your personal experiences inspire you to write ‘Travails of a Trailing Spouse’?

It started as a memoir; when I think about to those first few months after arriving in Singapore, it has such a surreal, almost magical quality, that I really wanted to document it. Then it quickly evolved into a novel, because, well, maybe because for me, it’s a little more fun to write fiction.

Did you write the novel while living in one country or did you move?

Just Singapore! So far I’ve only lived in one other country besides the US, where I’m originally from.

How did the experience of writing differ to the work you did in your career previously?

I worked in finance and investing previously, so it’s definitely a lot different. The biggest difference is the individual and personal nature of writing. I’m still getting used it that – being totally on your own. It’s hard not to take rejections and criticism personally!

How did you research your novel?

I did some research online, but much of the information about Singapore is taken from my own personal experience.

And tell us a little about you as a reader…do you have a favourite book or author?

I’m drawn to stories about the immigrant experience; although I was born and raised in the US, my parents immigrated from Taiwan in the ‘70s. Perhaps it’s a way for me to connect with them. The Namesake by Jhumpa Lahiri and Americanah by Chimamanda Ngozi Adichie are two beautifully written novels that I absolutely love.

Is the book based on your own experiences?

As I mentioned, it did start as a memoir. But most of the juicy stuff is probably fiction!

How did you find the writing process? And how long did it take you to write the book?

People are usually floored when they hear my response: about five weeks! Of course there was a lot of editing later. But that initial draft just gushed out of me; I think it was all pent up inside.

What does a normal workday look like for you?

I find ideas everywhere – and try to find time to write whenever I can. Right now I am crazed with promoting Travails, but I’m hoping to get back to the laptop very soon. Today I visited the airport bookstores to check on my book displays, then I spoke at a luncheon and met some fantastic expats that hopefully will enjoy reading my book. Somewhere in between there I found time to help my kids with homework, piano and play a few board games.

Did you experience any creative slumps? How did you get yourself out of them?

There have been times when I have written a dozen or so pages, but then end up scrapping them all – it’s heart-breaking to see all those words go to waste! If I feel like I’m in a writing rut, I’ll work on another project – a short essay or story, or the outline of another novel!

Many of us expat women find ourselves moving from full time work to no work…would you encourage others to write?

Yes! I find writing very therapeutic, and I face every day with a different viewpoint. Even an unpleasant encounter can become pleasant because I know I can write about it at a later point.

Any plans for a sequel to ‘Travails of a Trailing Spouse’?

I’d love to do one! I’m already collecting those “unbelievable but true expat” stories to incorporate in the sequel. Here’s hoping I’ll get the chance!

Thank you to Stephanie Chen for taking the time to do this interview! ‘Travails of a Trailing Spouse‘ is out now, on Amazon (US), in bookstores in Singapore and at Straits Times Press.

hanie Suga Chen is the author of Travails of a Trailing Spouse (Straits Times Press, 2018) and a former partner of a New York City-based investment fund. A Taiwanese-American, she grew up in Michigan and moved to Singapore in 2012 with her husband, two children, and ageing cocker spaniel. Connect with Stephanie at her website www.stephaniechen.org or on Facebook www.facebook.com/StephanieSugaChen.

‘Travails of a Trailing Spouse’ follows Sarah, a successful but unhappy lawyer in the US who one day gets to gleefully throw her resignation letter onto her senior partner’s desk when her husband Jason, a neuroscientist, gets a job in Singapore. Sarah and Jason say their farewells and, with their two children, fly off to a new country, a new condo, and a completely new life.

The country? Easy to adapt to, with familiar food and brands (at jaw-dropping prices – $15 for a bag of shredded mozzarella!) And life in the condo is like freshman year all over again, a dorm where neighbours pop by at any time to say hello, borrow a bike pump, or drink themselves silly any old night of the week. There’s Carys, the teacher, and good-looking Ian; Ashley, who keeps her apartment freezingly air-conditioned round the clock, and Chad, her amiable New Zealander husband; Sara, who, like Sarah, is Asian-American, and John. The couples form a close-knit group and their evenings are soon filled with poolside barbecues, Trivia Nights, dinners, drinks and more drinks.

But is it time to put the brakes on the hedonism when Jason and Chad are arrested after a pub brawl? Why, with an unbelievably fantastic lifestyle, is Sarah starting to feel listless? Why does John keep taking solo trips and when will Sara’s brave front finally crack? Who’s that woman with Ian in the lift? And what secret is Carys keeping from her friends? Not a simplistic, straightforward novel of one-dimensional characters, Travails of a Trailing Spouse will strike a chord with anyone, expat or not, who has ever found life more complicated, puzzling, thrilling, frustrating – and, ultimately, deliciously rich – than could ever have been imagined.